i've been cooking a lot more lately, & eating out less. it's a nutrition thing for me, but it's also added an extra level of interest since i'm well overdone on the healthy options for lunch around my office, & well turned off by the unhealthy ones. so i've basically started making a giant pan of something delicious, having a serving fresh & then packaging the rest for lunches. i do food logging & i've been posting about this elsewhere, but considering i've gone to the effort of photography, i may as well start copying them here like i've done with my jewelry posts.

& even buying the high-end 99% lean turkey, a serving is still only $1.70. next time i'll add spinach & carrots for more color; it was delicious, but too beige overall.

another package of 99/1 turkey breast; snap peas, zucchini, carrots & spinach; thyme & coriander to season. i wanted a bit of sweet in it, so i cooked the turkey with blueberries - didn't quite come out how i was thinking, but it's an interesting addition & made the turkey bluish XD. i added some craisins at the end, & those worked perfectly for the sweet/savory i was going for. a dash of worcestershire brought it all together.

one portion is 226g, 142 calories, 18g protein, 13g carb, & a shitton of vitamin A, haha. a serving is a little small for dinner, so i had a piece of double fiber oroweat toast with 30g avocado alongside it. yum!

it's another unintentionally vegan meal because mmmmmm i love broccoli rabe. it takes forever to get tender, but once you get to that point, it's delicious. i added garbanzo beans, zucchini, onion & garlic, thyme & basil. a 283g serving has 143cal, 21g carb, 8g protein, a quarter of my day's fiber & half my vitamin A.

i had a second bunch of broccoli rabe from our CSA, so i sauteed that with some skinless chicken breast, zucchini, spinach, carrots, & onion; basil, oregano & black pepper. 275g is 123 cal, 11g carb, 15g protein, 5g fiber. & i have lunches for the rest of the week from it, too. 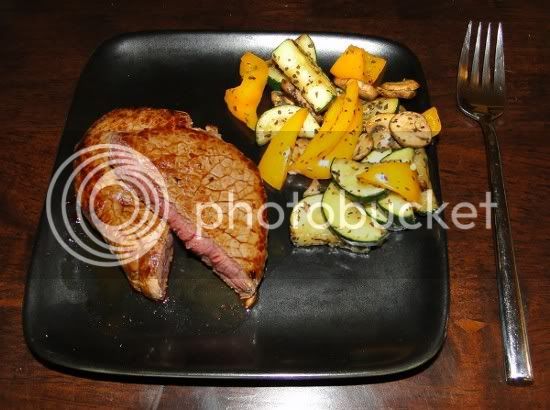 i found a nice eye of round on sale at the grocery on the way home, & i snagged it. no special preparation, but it came out tasty & decently tender considering it's a tough cut.

sauteed up some zucchini/mushrooms/orange pepper/basil to go with it, & threw on some worcestershire after taking the pic.

i worked on a dread client all day, accidentally neglecting food, & our CSA arrived friday, so i decided to make a GIANT SALAD for dinner, eaten right out of this IMMENSE PLASTIC BOWL.

organic romaine & heirloom lettuce, mushrooms, orange pepper, carrots, a full bunch of radishes, cucumber, & i steamed some fresh shrimp for protein. i'm not much for cloying dressings, but i picked up one of the wishbone salad spritzers (italian), which is light enough that i like it. the bowl is 832 grams (!), 281 calories (plus one calorie per "spritz"), 33g carb, 36g protein, 10g fiber, all the vitamin A & C i could eat, & nearly half of the day's iron. i'm not sure i'll make it through the whole bowl, but damnit, I'M GOING TO TRY. 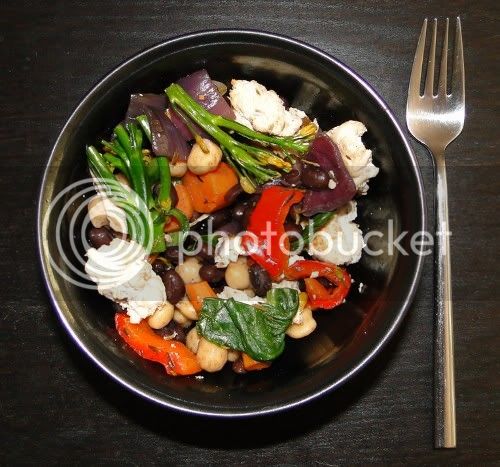 another GIANT SALAD! lettuce, spinach, red peppers, radishes, cucumbers, celery, & 3oz of raw sashimi-grade yellowtail. i considered searing it, but decided fuck that. :D 818g, 270cal, 27g protein, 29g carb, 12g fiber, & a huge 2100mg potassium (45% RDA!), which is difficult for me to get enough of. i have another serving of tuna left, so i'll probably sear that tomorrow.

so i'm now deep in planning for a trip to see ryan ouellette for a large-scale cutting across my left ribs & abdomen. i mean, just look at the things that this guy is capable of. wouldn't you trust your flesh to him?

some of you may recall that i enjoy turning simple events into tremendous planning extravaganzas, & here i've turned a single roundtrip flight to NH into two one-way flights, starting with several days hanging out with one of my oldest friends,

jesuscrux, then a 6h road trip to NH with him whereupon

atrophie will fly in to meet us, commence a day or so hanging out in NH, the massive cutting, & then flying home the next day - WITH joe, which wasn't so easy to plot out on his budget.

i. am. stoked. anyone have any suggestions for random shit to do in NH?

oh by the way, remember when i posted that "'i must not tell lies' would be a kickass HP hand tattoo or scar"? well guess what else ryan did. :D

i know it's been a while since my last post - it's due to working, working, & also working (new preorder open now) - but here are some other exciting tidbits of my life:
Subscribe